In a state better known for its bourbon, beer and wine tours are also another popular way to taste Kentucky’s great drinks. Craft breweries in Louisville and Lexington continue to draw national acclaim. Kentucky is also the home to nearly 70 local wineries.

Microbreweries around the state offer beer tours exploring the production, sensory elements and history of brewing in Kentucky. Whether the best beer for you is a bock or an IPA, breweries can accommodate your taste.

The first commercial vineyard in the United States was in Kentucky, a leading wine producer until Prohibition. Today’s wine industry capitalizes on the state’s rich agricultural heritage paired with the latest winemaking technique. 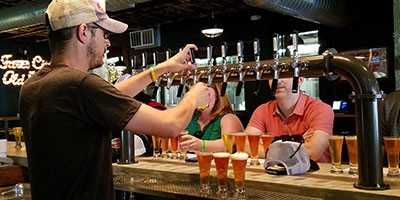 Let Mint Julep Tours be your guide to the city of Louisville’s best beer with “Brew in the Lou.”

Custom beer and wine tours can be arranged for a private group experience of local craft breweries and wineries.

Urban winery Old 502 in Louisville is a popular stop for a wine tasting flight paired with small plates. Venture out into the state to seek your favorite wine varietals or find a new favorite bottle. Ask your experience coordinator for wine tour options.