It seems that lately downtown Louisville has an unquenchable thirst for bourbon. Or at least new bourbon distilleries and tour experiences. The whiskey scene smack dab in the center of Kentucky’s biggest city has come a very long way in a short time. It’s hard to believe that it was less than five years ago that the $10.5 million dollar Evan Williams Bourbon Experience first threw their doors open on Main Street. It was a revolutionary move that marked the first time a whiskey still was fired up for commercial use in downtown Louisville in nearly a century.

Since 2013, whiskey experiences of all shapes and sizes have opened throughout the area. The number of downtown distilleries means that visitors can fill a day with bourbon adventures. A bevy of experiences designed for both the avid bourbon fanatic and casual sipper alike.

By 2019, there will be at least seven different venues within a five-mile radius on and off The Kentucky Bourbon Trail® . A long walk straight down Main Street alone will take you past Angel’s Envy, Evan Williams, and The Kentucky Peerless Distilling Company. Throw in a short detour to 4th Street Live and you can sit, sip, and enjoy a brief whiskey education at Jim Beam’s Urban Stillhouse.

Several others, including The Bulleit Frontier Whiskey Experience, Copper & Kings American Brandy Distillery, and The Kentucky Artisan Distillery, are just a proverbial hop, skip, and jump from downtown. This spring brings a pair of particularly exciting grand openings when two bourbon distilleries will add even more options for those pursuing the perfect pour. Old Forester, one of bourbon’s most storied brands, will host their first tour of the massive Old Forester Distilling Company on June 14, 2018 at 119 West Main Street. The distillery, located smack dab in the middle of Louisville’s historic Whiskey Row between 1st and 2nd streets, will be offering tours seven days a week.

Rabbit Hole Distillery, one of bourbon’s much ballyhooed newcomers, has set a target date of July to open to the public. Located in Louisville’s NuLu district at 711 Market Street, the distillery hosted a ribbon cutting early in May and is already fully operational with whiskey filling freshly charred barrels daily. In addition to tours, Rabbit Hole will boast an onsite bar along with a full restaurant in their massive 5,500 square foot facility.

The Old Forester and Rabbit Hole bourbon distilleries perfectly represent the mix of bourbon brands sold today. Old Forester began production nearly 150 years ago and has remained a constant mainstay of liquor store shelves ever since. Rabbit Hole conversely has only sold their products for four years and focuses on innovative releases such as bourbon finished in sherry casks. It’s no coincidence the date of Old Forester’s grand opening, June 14, falls on National Bourbon Day. The day where everyone from Bangor to Boca Raton is encouraged to raise a glass and celebrate America’s one true “Native Spirit.” And there are few brands that are more connected to that history than Old Forester.

Before George Garvin Brown came along with his innovative idea to sell whiskey exclusively in glass bottles in 1870, whiskey was often sold directly out of barrels. Opportunistic bar owners and shady rectifiers engaged in endless product tampering that created ongoing issues with quality and even health concerns.

Brown’s modernization of using a sealed bottle, originally intended for doctors who frequently prescribed whiskey as medicine, came with a handwritten pledge that ensured confidence regarding both the purity and excellence of the contents. By the early 20th century, glass bottle production become universally affordable and the industry shifted permanently. In a field where the lore and legend don’t always align with history, the Brown family can certainly stand by the claim of producing the first bottled bourbon in Old Forester.

Something New for Old Whiskey 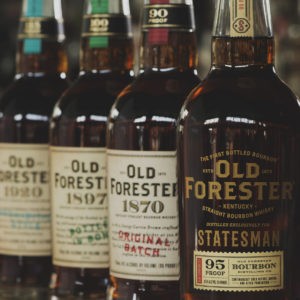 After years of planning, construction and a massive fire which caused significant delays, The Old Forester Distilling Company might be one of the most ambitious and impressive new additions to The Kentucky Bourbon Trail® yet. Parent company Brown-Forman has pulled out all the stops in the pursuit of trying to replicate the success they’ve found at the stunning Woodford Reserve distillery just over an hour down the road.

At a price tag topping 45 million dollars, the 70,000 square foot distillery is impressive. The facility includes a 900 barrel warehouse, a copper still that skyrockets to an impressive five stories in height and a bottling line that will produce nearly 5,000 bottles a day.

The tour will offer the unique experience of being able to watch coopers actively assemble bourbon barrels – a first for any tour. Guests will also have the opportunity to char a bourbon barrel with the press of a button.

Visitors won’t have to worry too much about interrupting the distilling process; most of the Old Forester production will remain at their primary home in Shively (and not open to the public). And, of course, any good bourbon tour ends in the tasting room. In this case, you’ll be able to sample Old Forester 86 Proof, Old Forester 100 Proof, and “a rotating Old Forester expression.” Tickets for the hour-long experience will cost $16 and may be booked online.

Going Down The Rabbit Hole Nearly a mile down the road, the Rabbit Hole Distillery is set to offer an experience that is slick, modern and, at times, jaw dropping. The distillery is the vision of founder and CEO Kaveh Zamanian who vowed to take his family down the Rabbit Hole into the world of bourbon making.

A clinical psychologist by trade and a relative newcomer to American whiskey, Zamanian has ambitious goals to distill roughly one million proof gallons of spirit per year. That would be enough white dog whiskey to fill an entire warehouse – roughly 20,000 barrels. The Kentucky Distiller’s Association welcomed the brand as their 36th member to the non-profit trade group earlier this year.

Zamanian has tapped experienced industry veterans to help move his brand to the next level. Distillery operation will be headed up by Master Distiller and Louisville native Cameron Talley. Talley honed his craft at both Wild Turkey and Brown-Forman bourbon distilleries. So far, he as helped produce three whiskeys for the brand. One innovative spirit already released is a Bourbon finished in casks. Taking advantage of the growing trends of finish straight bourbon whiskey in other woods, the Rabbit Hole Bourbon PX Sherry Cask is a straight bourbon whiskey that has matured for several additional months in 30-year old Pedro Ximenz Sherry casks. This space was designed, above all else, with visitors in mind. Along with the ubiquitous tasting room and gift shop, the distillery will include two bars. One at the Jefferson Street entrance and another top floor lounge serving up sweeping views of Louisville. Also planned is an event space accommodating 160 people is also planned.

If all goes well, Zamanian may end up being a name just as well known in bourbon as Beam or Russell. As is the case for any whiskey that’s patiently aging in warehouses, time will be the judge of final quality.

Old Forester and Rabbit Hole are hoping to leave their mark as two unique brands. Each planning to provide equally unique experiences with their own story, style, history, and of course, whiskey. And you can be we’ll be among some of the first guests in line when they open!’

Mint Julep Experiences is proud to offer new elevated bourbon tour visits to both Old Forester Distilling Co. and Woodford Reserve Distillery! Iconic whiskeys Old Forester and Woodford Reserve have partnered with Mint Julep Experiences to offer a new upscale “daily double” bourbon experience. The duo of Brown-Forman bourbon brands now offer a chance to see both Kentucky distilleries on the same day through this new elevated tour and tasting. Click here for more information and to book a tour!